A common question asked by many novice scuba divers is “how deep can you scuba dive?”.  Unfortunately, the answer isn’t as straightforward as drawing a line on the sand (or water, in this case) and saying, here is how deep you can scuba dive.  You’ll have to consider many factors, including the breathing gases, the diver’s experience, and especially a diver’s personal tolerance to high pressures.  We’ll look deeper into these factors and see for ourselves the maximum safe depth anyone can scuba dive, as well as try to understand why these precautions are around in the first place. 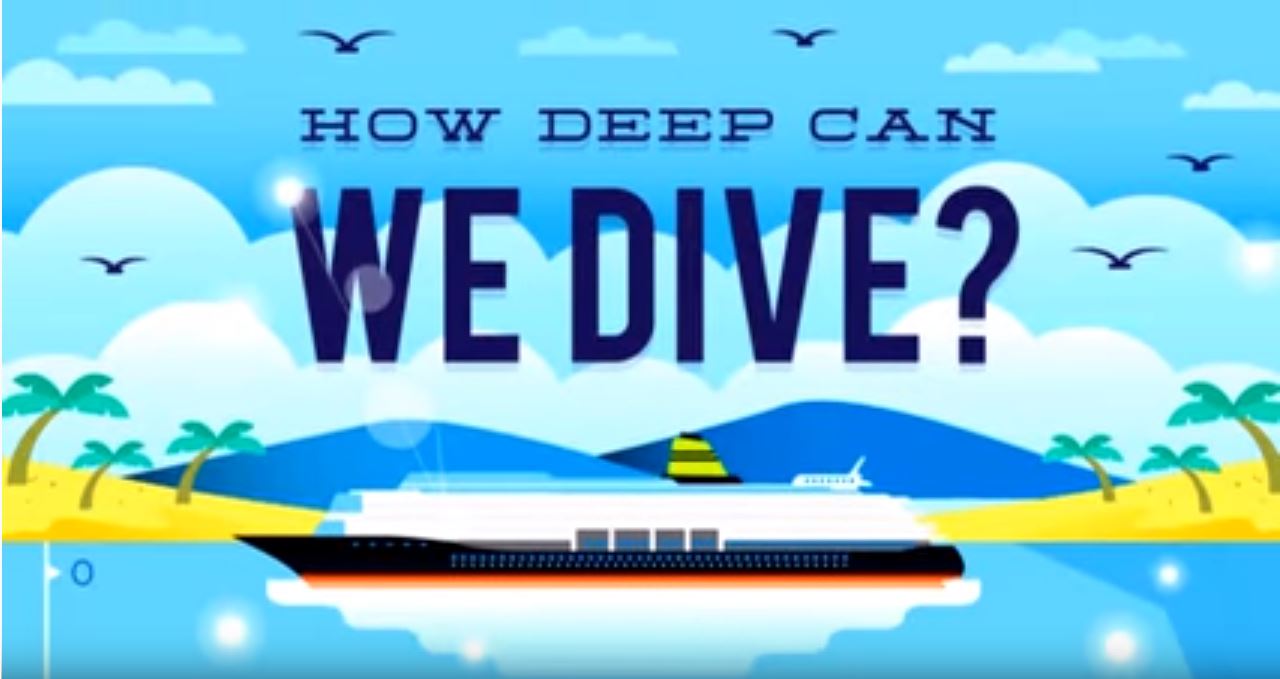 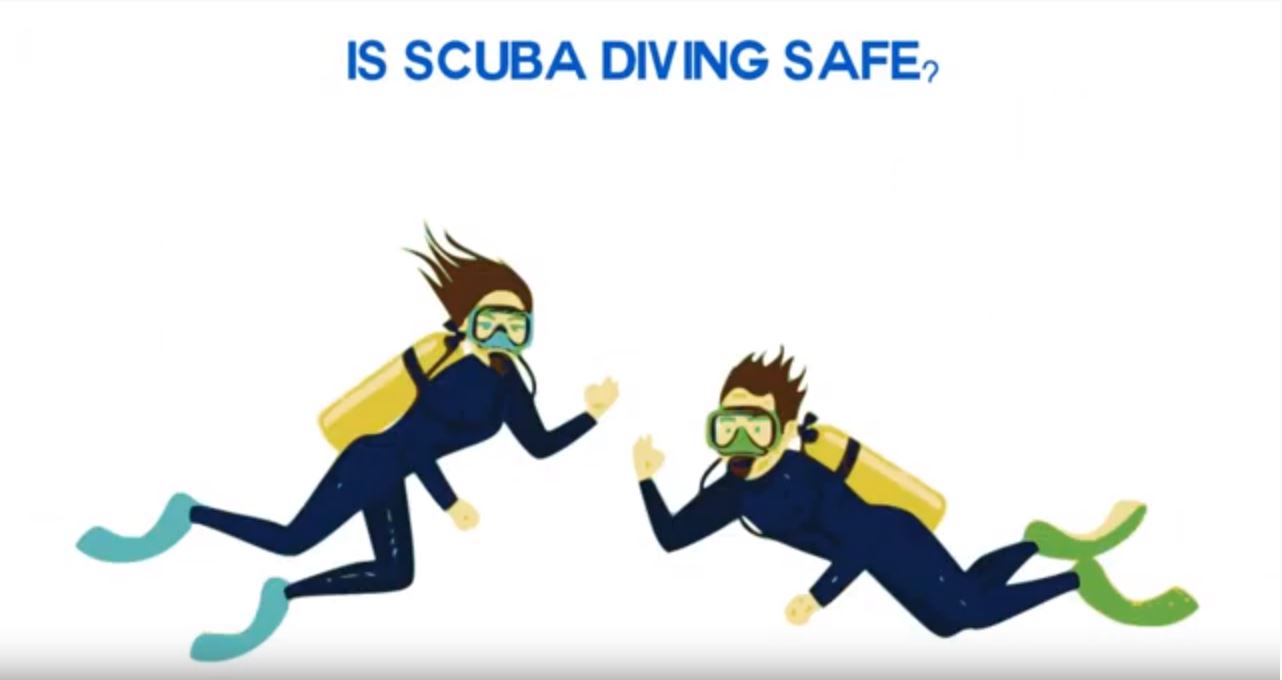 How Deep Can You Scuba Dive?

The deepest anyone has ever been whilst scuba diving is 1,044 feet, a record set by Ahmed Gabr on September 18, 2014.  Now, just because experienced technical divers have regularly gone into depths as deep as 1,000 feet and beyond, doesn’t mean anyone else who has a recreational diving background can do it.  Diving this deep is a feat not everyone can do, and requires a lot of preparation, both physically and mentally to pull off. F or anyone who’s not experienced, or has very little in the way of training, they’ll have to settle for a depth set by many scuba diving organizations, which is 130 feet.

So, the short answer to “how deep can you scuba dive?” is 130 feet.  But why 130 feet?  Well, there are many reasons, and we’ll talk about all of them today.  Once we’re done, you should be able to understand why it’s foolish to even consider breaking beyond this depth limit, and why going as deep as 1,000 feet is a remarkable achievement for any technical diver.

One of the biggest factors as to how deep can you scuba dive is the concept of decompression.  By its most basic definitions, decompression is the release from compression, or pressure.  Whenever you go underwater, you’re entering an environment that has a much higher pressure than what you experience on land.  The deeper you go, the higher the pressure that’s bearing down on your body.  Water itself is about 750 times denser than air on land and being in this sort of environment causes your body to undergo certain changes; changes that can be harmful. 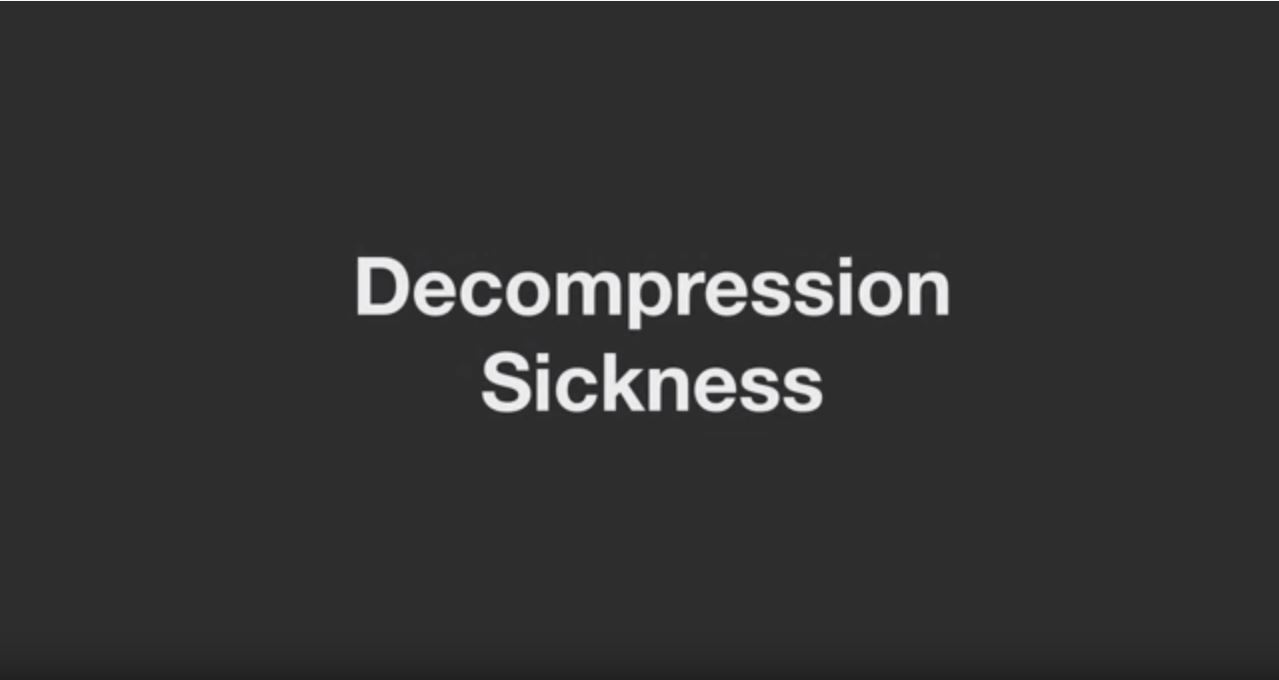 To compensate for these changes, a diver can ascend from their dive, which lowers the pressure on your body, which then allows you to mitigate these changes accordingly.  Unfortunately, rising too quickly means your body wouldn’t be able to regulate fast enough, causing even more problems.  That’s why divers undergo what they call “decompression stops” on their way up from an extended deep dive to allow their body time to adjust as they go.  While undergoing a decompression stop, you’ll have to take into account your air supply, which adds another dimension to the concept of decompression.  You’ll have to remember that while you’re no longer moving in terms of depth, you’re still using up air.

So, to summarize, staying too long in deep water is bad, but going up too quickly is also very bad.

Nitrogen in your Bloodstream

The effects of high pressure on your body has a huge impact as to how deep can you scuba dive.  Whenever your body experiences higher pressure, the nitrogen that’s mixed into your air is being steadily dissolved inside your body.  While not inherently fatal, the longer you stay at high pressure, the more nitrogen is being dissolved into your bloodstream.  Having a high concentration or nitrogen in your blood causes an effect known as Nitrogen Narcosis.  Nitrogen narcosis is a condition that slows down your nervous system and the brain, and you’ll be experiencing confusion and a lack of coordination, as if you’ve been drinking a lot of alcohol.  This can impair your judgement underwater, which can then lead to you doing some really stupid things. 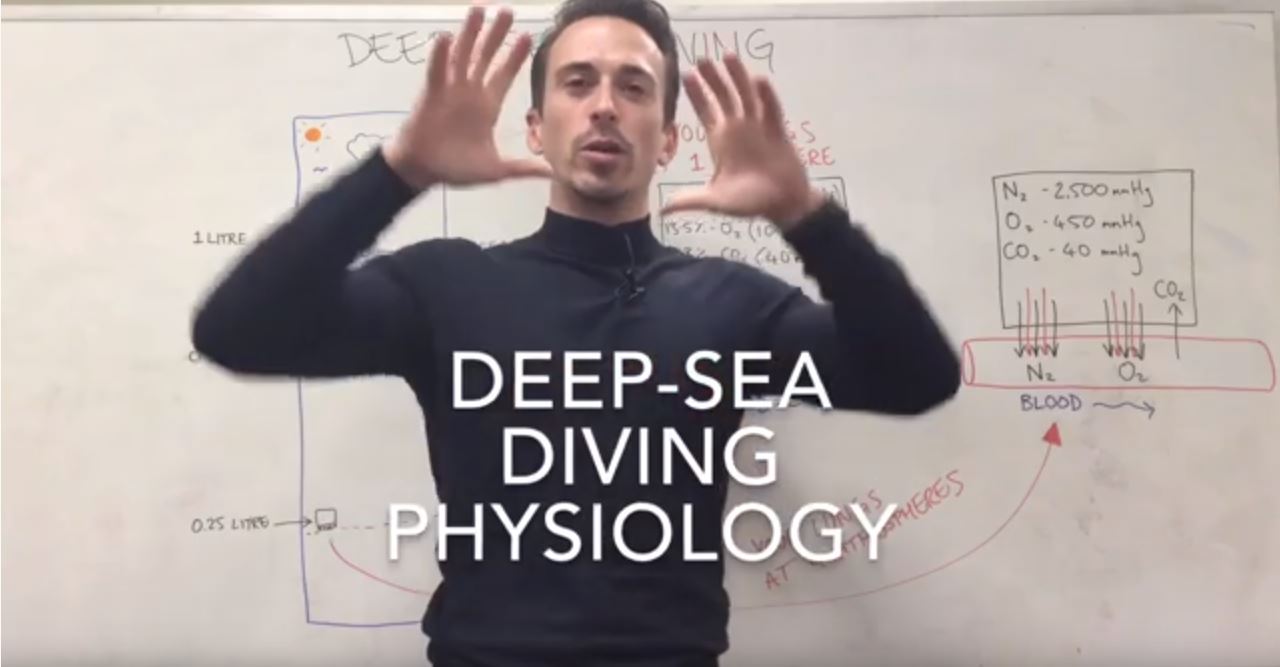 The higher the pressure, the faster nitrogen is being metabolized inside your body.  This means that at particular depths, divers can only stay for a certain period of time.  At 130 feet, you can only stay for about 10 minutes before you’ll need to do decompression stops on the way up, as opposed to more than 2 hours at 40 feet, if the air supply lets you.  Recreational dives deeper than 130 feet basically mean you’ll have little time to enjoy your dive, or in the case of the US Navy who first set this dive limit in the 1950’s, too little time to do any meaningful work.  While the 10 minutes at 130 feet is the established the amount of time you can safely spend at depth, it’s only so you wouldn’t have to worry about decompression.  So in theory, you can spend more time at a certain depth, so long as you take the necessary decompression stops when you do decide to ascend.  Do remember that while you’re doing your decompression stops, you’re still consuming vital air.

Staying too long in deep waters isn’t the only way nitrogen can cause you problems, either.  Another effect nitrogen can have on your body is something known as the bends.  Otherwise known as decompression sickness, whenever someone ascends too quickly, the nitrogen that’s built up in your bloodstream forms bubbles, which can then cause blockages leading to tissue and nerve damage, and in some cases, can even cause paralysis or death. B y going up at a steadier pace, this build up of nitrogen can instead be safely released through the lungs.

The Problem with Pressure

While nitrogen itself is a huge contributing factor at how deep can you scuba dive, a person’s individual tolerance to high pressure will also be a determining factor to consider.  One of the most common injuries associated with deep diving, or dealing with high pressures in general, is barotrauma.  Barotrauma happens when parts of your body that is filled with air can’t or won’t equalize the pressure between it and the water that surrounds you.  Common areas where this can happen includes the nasal cavities, your ears, the sinuses, dental roots and your lungs. 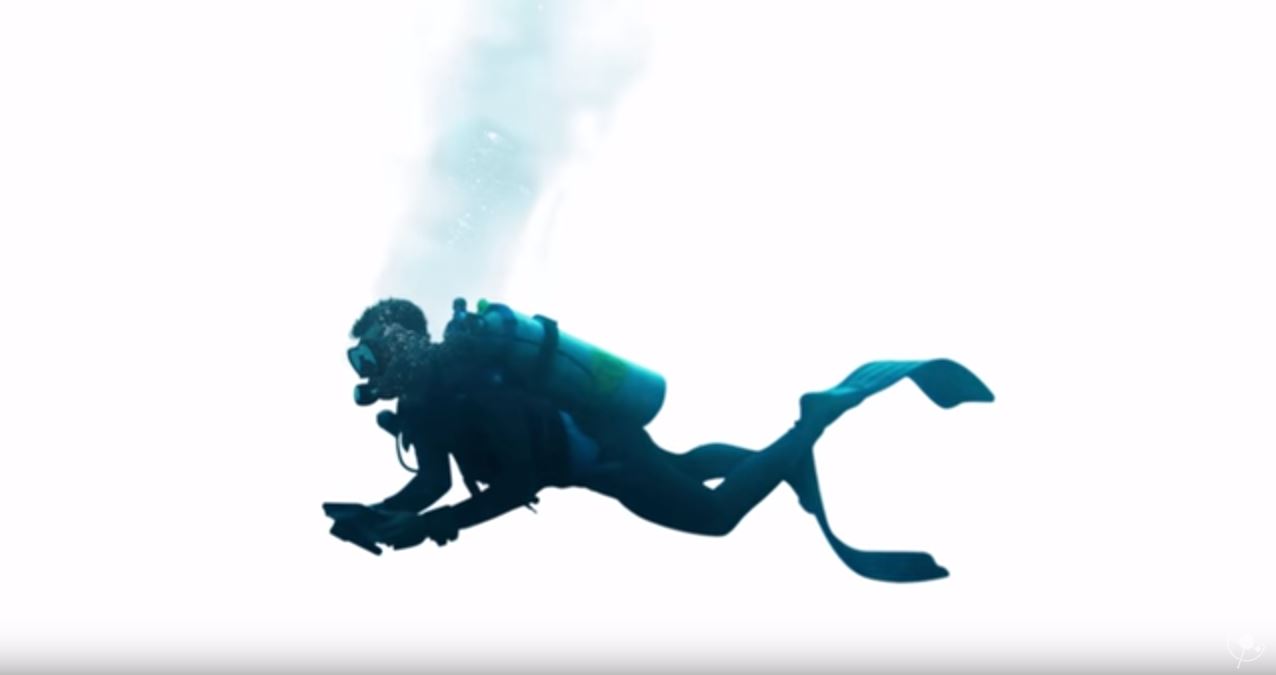 Source: The Science of Breathing Underwater

Barotrauma can happen both while ascending and descending.  While you’re going deeper, the volume of air in your body decreases while the surrounding water pressure increases.  This can cause your eardrums and your sinuses anything from severe discomfort to actually rupturing.  While ascending, on the other hand, the pressure in your body increases, while the water pressure decreases.  This can cause your lungs to expand too quickly, and can make it difficult to breathe, especially if it ruptures.  There’s also a real danger of air bubbles forming in your blood, which can cause blockages, and if left unchecked can cause a heart attack or a stroke.

The Question of Air Consumption

The amount of air a person breathes changes as they go deeper, this is because the gas they breathe becomes more compressed as the water pressure around them becomes stronger.  At depths of more than 100 feet, for example, you’ll be consuming air about five times faster than you normally would above water.  This significant increase in air consumption means that your dive times are significantly limited by your air supply.  If you want to maximize the amount of time you’ll spend at deeper depths, then having a higher capacity oxygen tank is a must.  You can also undergo training that will allow you to consume less air as you dive deeper.  Of course, breathing in too much air does have problems of its own. 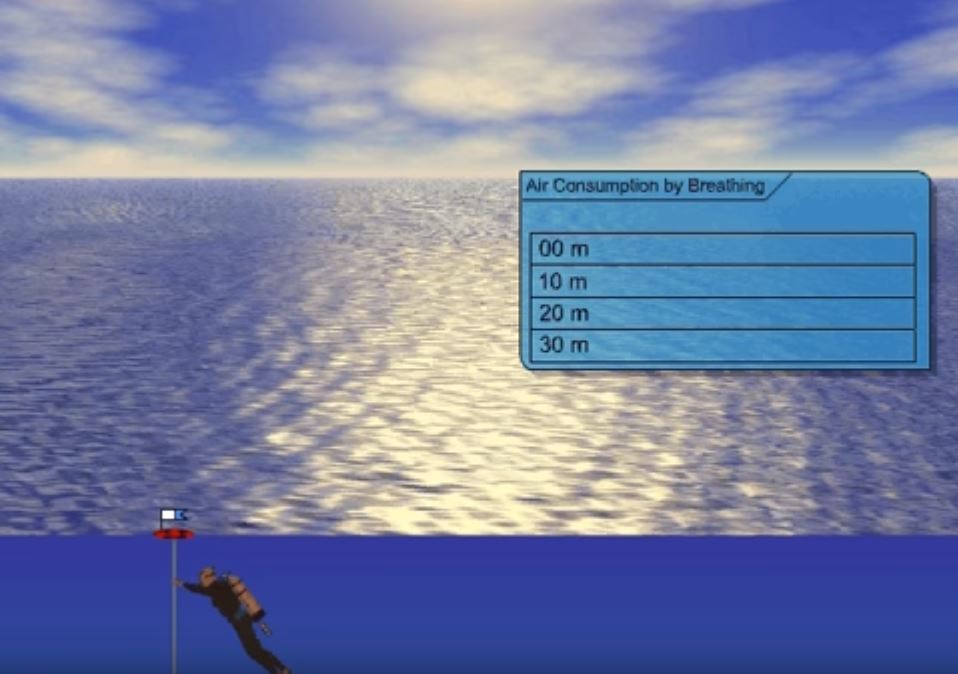 Source: How to Calculate Air Consumption (1/2)

While a lot of people consider oxygen as something vital for them to live, not many understand that breathing it in high concentrations is actually toxic.  Breathing in too much oxygen can cause convulsions, and if not treated immediately, can cause death.  Because the air a person is breathing underwater becomes compressed, it’s very easy to consume high concentrations of oxygen if you don’t pace your breathing.  While oxygen toxicity itself is not a major concern to most recreational divers, since oxygen toxicity is only a major issue at depths deeper than 200 feet, it’s one of the reasons why exceeding the recommended dive limit is a bad idea. 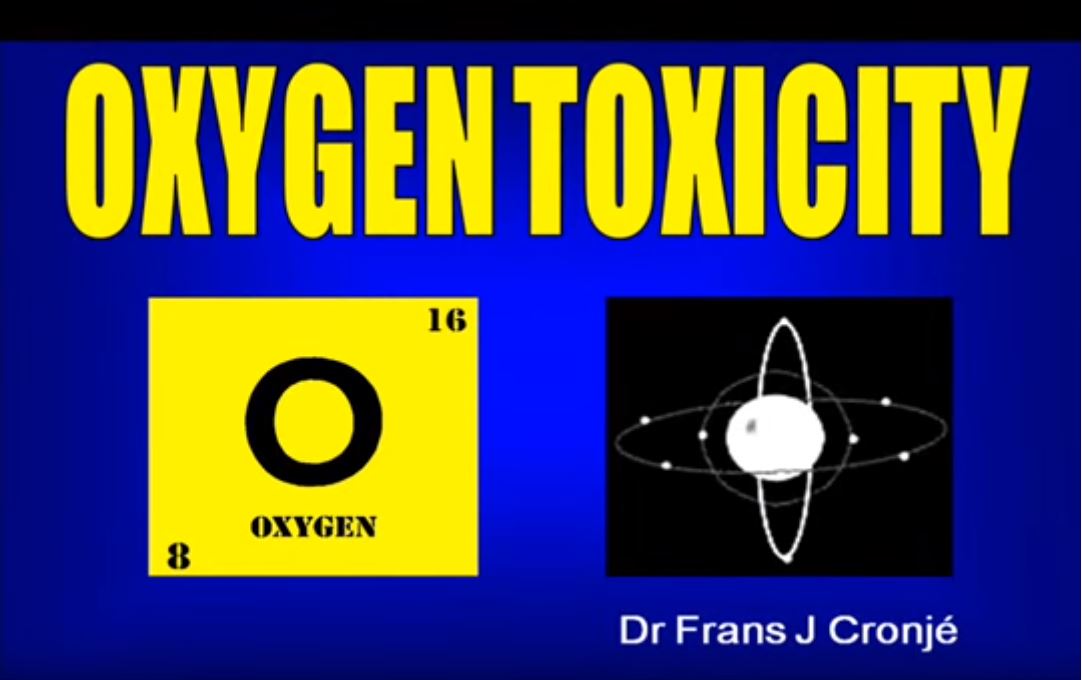 Now that we have a firm grasp as to why going too deep is a bad idea, let’s look into ways you can actually overcome these limitations.  Do understand, however, that going deeper than the recommended maximum depth is a huge risk.  But like any risk we take, you can make preparations that will allow you to break your limits.  In this case, you’ll need to have the right certifications, specifically, technical diving certifications and deep diving certifications. 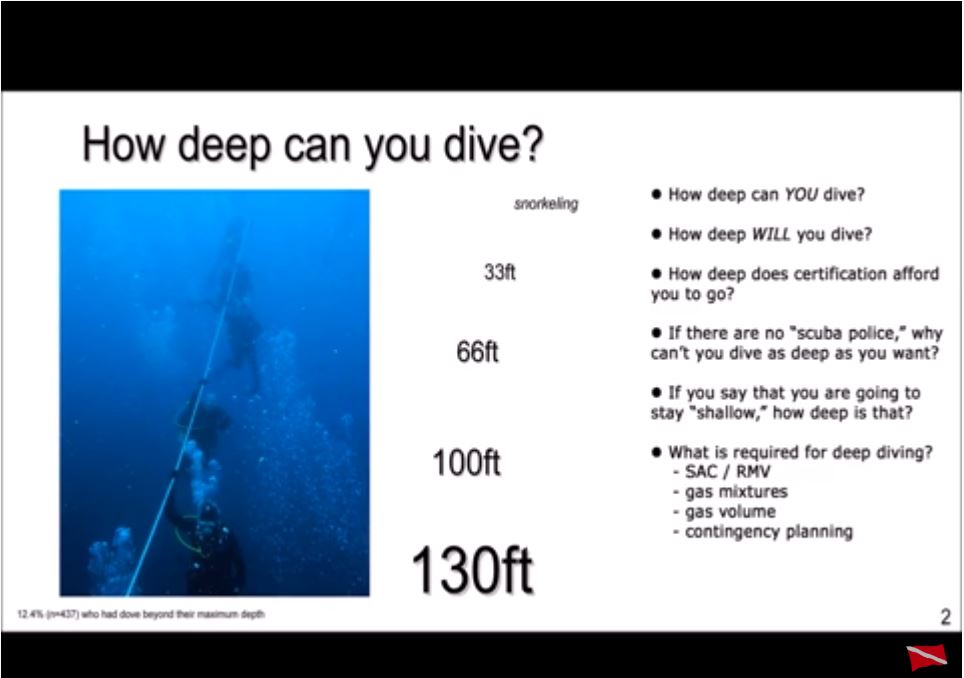 There are many places where you can receive a technical diving certification, but all of them require time, training and dedication.  You’ll need to take more advanced courses compared to the basics, such as deep air training, learning decompression procedures, and properly mixing your gasses.  It’s very important that you do not try going into such depths without the right training, or at the very least, an experienced diver to supervise you.  The need for additional training naturally depends on your individual tolerances and the actual place where you’ll be diving. 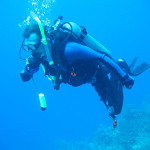 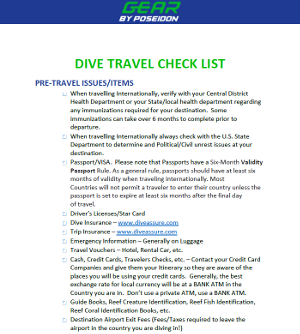